NEW DELHI: A decomposed body of a girl from Meghalaya strikes no less sensation at a busy area in New Delhi on Wednesday.

Identified with the help her Aadhar Card, the body of the girl was recovered from a flat in Munrika area in the capital city in the wee hours.

She was working with a call centre. Police have registered a case to be investigated to ascertain the reason of her death. 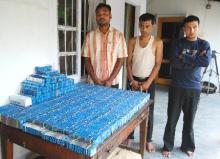 28 Apr 2008 - 1:29am | editor
Huge contingent of fake medicine has been seen at the Dispur Police Station which was recovered by the city police from a rented house at Jonaki Path area near Down Town Hospital on 27-04-08. Three...