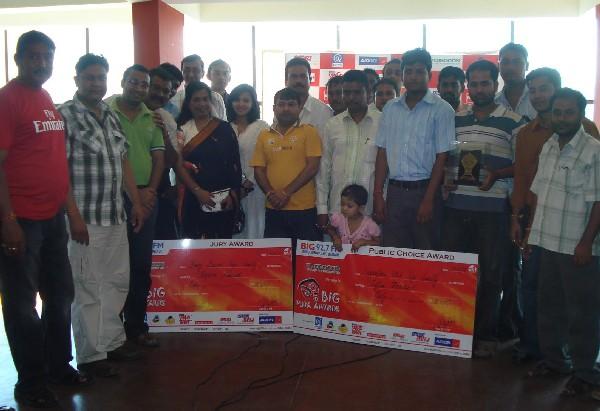 The jury, which consisted of Mr Pulak Banerjee, Mrs Anuradha Sarma Pujari & Ms Nishita Goswami nominated 8 Puja Pandals based on their criteria. Out of these 8 nominated Pujas, listeners were asked to vote in for their favourite Puja Pandal by SMS for the BIG Public Choice Award. Over and above the 8 nominated Pandals, listeners were also asked to vote for their favourite Puja Pandal, if they found one worth voting for.For the BIG Jury Award, the jury members along with the BIG Team personally visited all the nominated Puja Pandals on Ashtami. Based on the standard criteria, special emphasis was also given to the traditional style and environmental friendliness approach of the Pandals. The winners in the two categories are:BIG Public Choice Award-Nayantara Club Puja Samity, Kumarpara, BIG Jury Award- Fancy Bazar Puja Samity, Fancy Bazar.

The purpose of this initiative was two-fold firstly to give the people of Guwahati an opportunity to also express their views about the Puja celebrations in Guwahati and the best Puja Pandal in the city according to them & to recognize the efforts of the various Puja Pandals in organizing and presenting a spectacular show and encourage them to do better, on the lines of similar contests held in other metropolitan cities of the country.

16 Feb 2017 - 1:07pm | AT News
A BBC report exposing the “extra judicial killings” inside the Kaziranga National Park in Assam touches off a seismic wave of anger in forest and environment ministry who demands action against the...