GUWAHATI: The Indo-Bhutan bonhomie is set to receive a huge boost if the golden jubilee celebration  of the formal diplomatic relations is any indication.
The Himalayan kingdom celebrated the Festival of Assam at Thimphu on Thursday and Friday at Hotel Taj Tashi, which was attended by the Home Minister of Bhutan, Dawa Gyeltshen, Home Secretary of Bhutan, Sonam Topgay, the Ambassador of India to Bhutan, Jaideep Sarkar and the Ambassador of Bangladesh to Bhutan.
A high level delegation led by the Minister, Cultural Affairs Department of Assam, Naba Kumar Doley, 8 MLAs and other officials also participated in the events.
The speakers in  the event recalled the age old relations between Bhutan and Assam and the trading activities between Bhutan and Assam.
Naba Kumar Doley also brought out the fact that Bhutan have established a Consulate in Guwahati and the visit of the Prime Minister of Bhutan to Assam recently.
A cultural troupe from Assam led by Somneth Bora Oja enthralled the audience with their stellar performance of Bihu and drum based performances.
The dignitaries and guests were also given a taste of Assamese cuisine, starting with Oou Tenga soup and other Assamese delicacies.
The India-Bhutan Trade and Transit Agreement of 1972 established a free trade regime between the two countries.
Every year, Bhutan Chamber of Commerce and Industry organizes the India-Bhutan Friendship Trade Fair in one of the bordering towns in which traders from India, including Assam, take part. 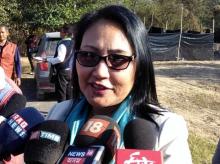 17 Apr 2016 - 5:54pm | AT Kokrajhar Bureau
A self-styled commander of Adivasi Dragon Fighters (ADF) was arrested by security forces from Kachugaon area on Sunday morning at a police operation. The cadre was identified as Supol Hembrom of...