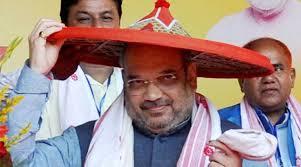 GUWAHATI: Brisk preparations are afoot in Guwahati for the BJP rally where party president Amit Shah is sounding panchayat poll bugle on Saturday.

Party leaders have been closely monitoring the preparations for the rally where at least a dozen of party leaders are addressing the grass root level leaders and workers.

A section of party workers has already arrived in the city on Friday and many others are on the way. The party has provided buses for the workers to come to the rally in the city from the far flung areas of the state.

The rally for the grass root level leaders and workers assumes significance since the saffron party will go it alone in the poll unlike the assembly polls.

But the party insiders take it differently. A senior party leaders call it an undeclared preparation for the general polls in 2019.

“Preparations are on for panchayat polls. But the ultimate preparations are for the Lok Sabha polls which is one year away. We need to activise the grassroot level workers,” said the party leader.

6 Jan 2013 - 7:00pm | editor
Its yet another record the state set on Sunday. Altogether 15000 artists played khol in Titabor to help Sankardev get global recognition.The event took place at Mezenga Pathar in Titabor where...