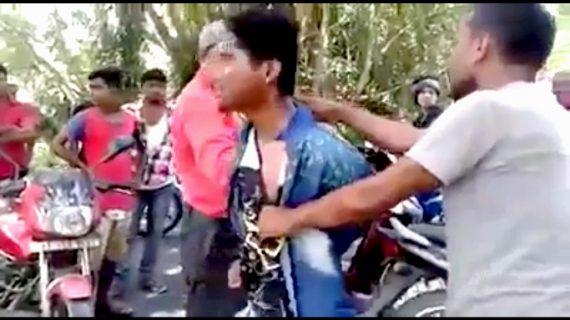 KALAIGAON In yet another gruesome incident of moral policing and mob violence a innocent youth was mercilessly assaulted by a group near Adarsha village under Kalaigaon PS in Darrang.The video which has gone viral in several social media platforms shows the unruly people allegedly led by one Pankaj Hazarika tieing the forehands of the youth and savagely assaulting the youth identifed as Bijay Ray (23). The youth is seen pleading what mistake did he commit. He screams in pain while another kicks him in the legs and shoulder as he slumps to the ground.The victim, son of Habul Chandra Ray, a resident of Ward No.1 of Gauripur town under Gauripur PS in Dhubri district works for cellular tower companies and had travelled for work purposes to Bishnupur village under Mangaldai PS in Darrang.The police said that incident took place on June 9 when the victim Bijay was on way to Adarasha village under the limits of Kalaigaon police station area in Darrang and was accosted and beaten up by the group.The victim youth stated that on receiving a phone call of a girl whom he had known in past visited the village to meet her.In the video, the youth is seen screaming, “I am Assamese”, and telling the mob his parents’ names  his address, in an attempt to convince them to stop. They didn't stop there, a voice from the mob asks the youth if he is a Bangladeshi, whether or not his name included in draft NRC. The Udalguri district AKRSU led by its President and Secretary, Hemanta Bora Koch and Nabajit Koch along with Secretary of Consortium of Koch Royal Families (CONKORF), Pranab Narayan Dev Koch has lodged two separate F.I.R's in this regard. The organizations have demanded proper investigation of thr matter and arrest of the culprits involved at the earliest. Darrang, Superintendent of Police, Sreejith T, IPS told Assam Times that the F.I.R's of  CONKORF and AKRSU have been clubbed and registered under relevant sections and the prime accused,Pankaj Hazarika has surrendered on Wednesday, and police is on lookout for the other co-accused. He further informed that the victim and the accused both reported the incident at Mangaldai P.S on the aforesaid day of June 9 and gave it writing that a scuffle had taken place and they don't intend to proceed further. The Mangaldai Police later left the youth in personal recognization bond after medical treatment,the report of which is yet to be obtained.