GUWAHATI: Yet another shoot out leaves the city of Guwahati an unsafe zone for the denizens to live these days. Miscreants shot dead a businessman in the heart of the premier north eastern city triggering shock and anger among the trading fraternity on Wednesday.
The incident took place at 9 in the evening at Kailashnagar in Hatigaon. As Hemant Chaurasia, the pulse trader was on his way back to home, four miscreants' riding on two bikes halted him and pump several rounds of bullets with a 9mm pistol. Then they vanished amid deepening darkness.
Hemant died minutes after the attack forcing police to fan in and around the area in search of the miscreants'.
City traders have condemned the incident and alleged utter failure of security forces to ensure safety and security.
Guwahati police commissioner, Hiren Nath who reached the spot told reporters that operation is on to nab the miscreants and that the miscreants took the advantage of the darkness on the street.

Gogoi hits back at Modi

10 Feb 2014 - 1:37pm | AT News
Chief Minister Tarun Gogoi on Monday claimed to have done more than Narendra Modi two days after his Gujarat counterpart took on him at a huge rally in Guwahati.Addressing a press conference in... 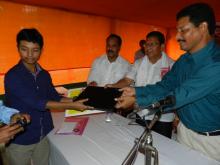