GUWAHATI: The Guwahati police have arrested nine Assam Engineering  College students on Wednesday hours after they vandalized a wedding ceremony bereft of any reason triggering anger in the entire capital city where the role of the principal has come in for sharp criticism.

Investigators told www.assamtimes.org that these students were interrogated and strict actions would be initiated if they were proved guilty.“Interrogation is going on. Right now we cant jump into a conclusion. But if they are found guilty nobody would be spared,” said an investigating officer in Jalukbari police station.

According to the complaint, dozens of AEC students suddenly stormed into the reception ceremony at night and assaulted many guests and vandalized the decorated venue bereft of any reason.

4 Feb 2018 - 2:43pm | Akshaya Pranab Kalita
The body of a 60 year old at a stone’s throw distance from Namrup police station struck no less shock in the entire area on Sunday. Identified as Badal Konwar the body was spotted at a drain at 11.00... 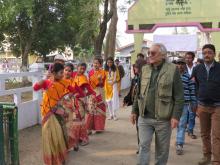 5 Nov 2007 - 5:17am | pbaruah
Chief Minister Tarun Gogoi says if Assam is to march, the rural areas should go for a speedy development.Addressing a few function on Sunday in Jorhat, Mr Gogoi says proper roads and bridges help in...