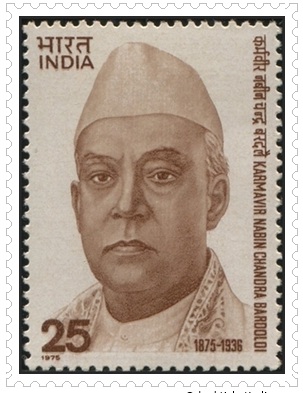 Guwahati: A national level patriotic people’s forum demanded the immediate reopening of Karmavir Nabin Chandra Bardoloi library for the common people in general and book lovers in particular. In a meeting on the occasion of Karmavir’s 82nd death anniversary at Guwahati Press Club on 15 February, the Assam chapter of All India Patriotic Forum also emphasized on installing a life size statue of the great patriot in an appropriate location of the prehistoric city. Various speakers in the meeting highlighted the struggle, moral courage and achievement of Karmavir (1875 – 1936) paying rich tributes to the freedom fighter, political stalwart and patriotic writer. Addressing the meeting as the appointed speaker, senior journalist Dhirendra Nath Chakravartty described Nabin Bardoloi as one of the most outstanding national leaders of the pre-Independence era.

Born on 30 October at North Guwahati Karmavir cleared his early education at Tezpur and later shifted to Kolkata for graduation in arts from Presidency College and law from Ripon College. He emerged as a prominent leader from Assam in Gandhiji’s non-cooperation movement. From 1921 to 1929, Bardoloi was arrested twice and sent to the prison for many months.

By 1934, Bardoloi was elected to the Indian Legislative Assembly and bestowed the responsibility of a spokesman for the opposition. Two years later he died on 15 February. Bardoloi was associated with the endeavour to establish the Cotton College and Earle Law College in Guwahati. He attended the Nagpur session of the Indian National Congress in 1920. Later he gave up his practices (law) and joined in the freedom movement.

12 Oct 2016 - 11:19am | Shajid Khan
A male jumbo was electrocuted in a paddy field at  Sagolijhar area, Panery of Nonai Forest Range of Udalguri district on Sunday night.  Dr. Sulab Sarma Vety. Assistant carried out the post-...

No respite from mercury

30 Jul 2015 - 7:08am | AT News
There seems to be no respite from sweltering heatwaves that continues to disrupt normal life across the state on Thursday. The temperature stood at 30 at 7 in the morning and it could go up to 38...