3 Jun 2011 - 1:47am | editor
The Apollo Clinic, Guwahati in association with Guwahati Press Club has organised a general health check-up and awareness camp for scribes on June 4 (Saturday). The camp will start at 10 am in the... 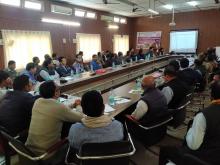 Is India a Hindu Nation?

27 Jul 2014 - 7:08am | Daya Nath Singh
India’s Lok Sabha polls in 2014, has brought a significant change in political scenario of the country after a decade’s rule of United Progressive Alliance (UPA) government led by the century old...