11 Nov 2014 - 8:48pm | Hantigiri Narzary
Security forces arrested three persons along with arms from various places in the district of Kokrajhar in the last 24-hours.Getting on a tiptop information security forces belonging to police and... 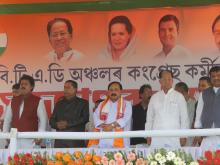