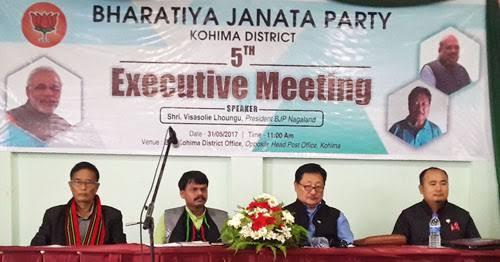 NEW DELHI: Caught in a deep dilemma Nagaland BJP leadership is holding a crucial meeting with Central party leadership in Delhi on Thursday to find a way out.

Led by state party president Visasolie Lohungue, a delegation is camping in the capital to appraise the party leadership of the prevailing logjam where the civil society organizations have asked them to boycott the upcoming assembly polls without resolving the vexed decade old issue.

"We have been trying to convince the party leadership of the real impasse in Nagaland. We beg to put the ball on the central leader's court. They must find a way out," said a Nagaland BJP leader in Delhi.

"We have been trying our best to apprise our party leadership in Delhi of the crisis. They must come to our rescue. We are talking to them on Thursday since the poll notification has been issued," he said.

He said that the civil society organizations who have been dead opposed to the February 27 polls have been asking them to formally clear the party's position a day after BJP pulled out of the joint declaration.

The Nagaland BJP leaders are holding talks with senior central leaders in Delhi on Thursday at the initiatives of Kiren Rijiju who has been holding the charge of the party's poll affairs.

The poll notification was issued on Wednesday and the last date for filing of nominations is February 7.

One crushed to death near Jorhat

11 Feb 2012 - 2:57pm | editor
One person died at a tragic road mishap in the outskirt of Jorhat town on Friday. The accident took place at 9 in the evening at Ladpoigarh on the National Highway where a speeding tractor rammed...