Indigenous tribes being threatened in Assam

The demographic invasion by Bangladeshis, led to clashes between Tribal communities and migrant Muslims, have cost more than 55 lives, 100 other injured in a span of just five days in the northern Assam districts of Udalguri and Darrang.

It's traumatic, people are in constant fear; village after village, houses have been reduced to ashess and smoke columns are visible all around in Rowtabagan, Dalgaon, Kharupetia, Bhakatpara, and Udalguri.

People are fleeing in thousands as the violence continues unabated. Over 100,000 people have left their homes and all their properties .

The Tribal groups and immigrant Muslims are now caught-up in 75 relief camps in Udalguri district alone. Yet, the state governement has failed to supply relief materials to the affected people.

'Shoot-at-sight' orders have been issued, while an indefinite curfew has been clamped across Udalguri district and parts of Darrang, Chirang and Baksa. Over 8,000 police, army and paramilitary troops have been deployed in four districts in Assam. On Tuesday, police used helicopters to spot armed to vigil the affected areas.

The ongoing violence is worst than 1983 (Nellie Massacre) where over 2,000 people, most of them Bangladeshi immigrants were killed in clashes in central Assam.

The indigenous especially the tribals of Assam, have been raising voice against illegal Bangladeshi migrants since the last three decades. But both Central and State Government have turned a deaf ear to their cary fearing lost of votes in elections. The government is fully aware of the situation, but for the survival of the government, authorities have ignored the truth.

It is not only the clash between Tribal groups and migrant Muslims but it is a threat to indigenous people of Assam. “We are not against any Muslim but migrant Bangladeshis”, says one of the victims who lost one of his arms in the riot. “How can one from foreign land occupay our own land”, says another person who has lost all his properties.

Ironically, instead of making symphatatic statement which would have relieved the victims, the Chief of Bodoland Territorial Council (BTC) Mr. Hagrama Mohilary once again takes golden chance to blame his rival NDFB responsible for the communal conflagration. The outfit (NDFB) is now in the process of Peace talk with the Centre. "The clash between the two communities was instigated by the third hand", he adds in his statement. 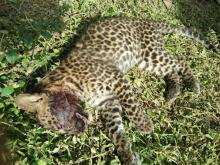 27 Nov 2017 - 5:19pm | AT News
NAMRUP: A leopard cub was found dead in Namrup which was believed to have been killed during a fight between two tiger on Monday. Tea garden workers spotted the lifeless cub under the tea...

11 Dec 2017 - 3:22pm | AT News
GUWAHATI:Pro talk NDFB chairman Ranjan Daimary appeared before the first tract court in Guwahati on Monday in connection with the 2008 serial bombing where nearly 100 people were killed in Guwahati,...