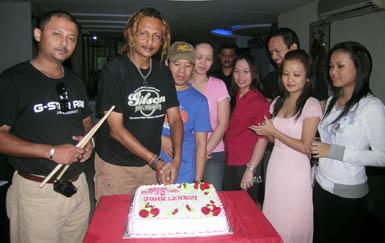 John Lennon has been an inspiration for thousands of music lovers across the globe since his music covers a wide range of emotions and wisdom. Millions of Lennon fans across the world express their profound love for the messenger of love and peace, through concerts held on his birth anniversary, which falls on October 9. His campaign for peace is as powerful as ever since the time he wrote and sang Give Peace a Chance in the legendary Bed ---- campaigning for peace at the Queen’s Elizabeth Hotel, Montreal in 1969.

Thousands of John Lennon fans have kept his “imagination” alive. Northeast India, being a favorite destination for Western music lovers, cannot be left far behind. Guwahati is out to make the icons Birth anniversary special this year. His fans in Guwahati will say it with love --- through a concert held at Crest on Lennon’s 68th Birth Anniversary. Friends, a pioneering Rock Band of Northeast India, under the stewardship of its front-man Dhruva Sharma, will be organizing the John Lenon tribute festival -- ‘Concert for Peace’ – under the generous support of telecom major Bharti Airtel.

John Lenon fan and Guwahati-based cultural journalist Aiyushman Dutta says, “The Beatles was more than just a rock band, it marked the change of global lifestyles. I won’t say that Lenon was the reason for the greatness of the Beatles, but at the same time it is impossible to imagine the Beatles without him. Nobody ever pushed the possibilities of Rock ‘n’ Roll like John Lenon did, and nobody in the music’s history has ever mattered as much.”

About the Peace and Harmony Concert :

The Peace & Harmony concert began in 2007 at the initiative of ‘Friends’ --- a pioneering Rock outfit of the region. Last year, the concert was held in city-based lounge --- Crest. The intermixture of a wealth of musicians and classy Lenon numbers ensured that the show was a resounding success. The warm response of the people compelled the band to make the show a regular event in the region’s musical calendar from now on.

Dhruva, frontman of Friends, says, “The main intention of this show is to get talents from the entire Northeast, as well as the entire country. And also to get the feeling of togetherness through music with no bars attached, since music is the best leveler. So this year too, this show is being organized in a bigger way on October 11, 2008 with more artists and bands. It would not have been possible to organize this show without the generous support of Airtel.”

5 Jun 2016 - 10:21pm | AT Kokrajhar Bureau
A massive prepartaions have got underway to hold the 8th edition of ‘Bodousa Cup’ in four clusters all over the state which has been scheduled to be held from June 26 next. Speaking the reporters at...

29 Mar 2009 - 3:02am | editor
The poll process for the second phase slated for April 23 began across Assam with President Pratibha Patil issued notification on Saturday.According to the notification, the last date for filing...