GUWAHATI: Good news for traders and tour operators from Assam. Courtesy Kazakhastan. The central Asian country on Wednesday evinced keen interest to receive these people in Almaty to explore the opportunities for bilateral cooperation in the hospitality sector. The open invitation dominated when its ambassador to India Bulat Sarsenbayev is on a five days visit to the premier north east Indian capital city of Guwahati.

Opening an interactive session on cooperation in tourism jointly organised by the Kazakhastan Embassy and the Assam Tourism Development Corporation (ATDC), Sarsenbayev outlined the need to explore huge business potential between the two Asian counties. Earlier, he met Governor Jagdish Mukhi where the duo discussed the issues of possible cooperation. 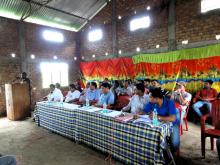 Another wild elephant killed in Udalguri

6 Oct 2013 - 5:50pm | Jayanta Kumar Das
A 12 years old wild elephant (Makhona) has been found dead at a paddy field near Bongshipur (Hatigarh) in Udalguri district at noon on October 5.The elephant is suspected to have been poisoned to...

8 Apr 2015 - 10:49am | AT News
Amid tight security brisk polling is underway in four BTAD district for the 40-member Bodoland Autonomous Council on Wednesday.An estimated 20,64,099 electorates are expected to exercise their...