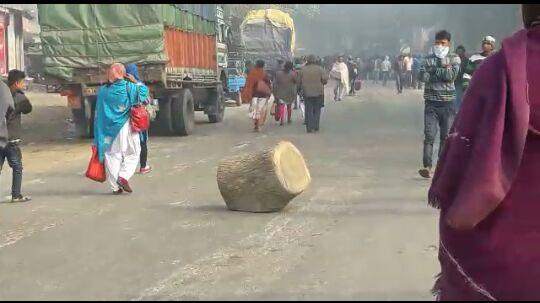 MONGOLDOI:An escalating tension in Dhula has forced the authorities in Darrang district to clamp curfew in the semi urban area hours after one person died and many others sustained injury when police resorted to open firing to disperse a group of protestors on Wednesday.

Army, police and para military forces are fanning in the nook and corner of the entire area where many policemen and protesters also sustained injury.  The incident took place when a group of local residents staged a peaceful protest in front of the Dhola police station alleging custodial death of the local worker on Tuesday. The authority acting on the initial report placed the officer in charge under suspension

As the senior police officials' including DSP and OC started talking to the protesters a section of these people suddenly turned violent and started raining stones at the policemen.  Police resorted to blankfiring and lobbing of tear gas shells to disperse the mob. But the raining of stones refused to die down. Then police started open firing for self defense where one protestors died on the spot and at least five others sustained serious injury who have been shifted to the hospital.

Three senior officials' including DSP and Dhola police station officer in charge also have been rushed to the hospital after they sustained serious injury in mob attack forcing the authorities to impose 144CrPC.

18 Mar 2014 - 2:37pm | AT News
A school boy was killed when police fired upon a group of people in Morigaon for illegal fishing at a water body on Tuesday.The incident of merciless police firing took place at Kordoibeel near...

15 May 2012 - 2:04am | editor
Dispur rolls up its sleeves to set up two separate police cells to firmly deal with Maoist elements and the menace of counterfeit currency. Disclosing this on Monday, Chief Minister Tarun Gogoi said...