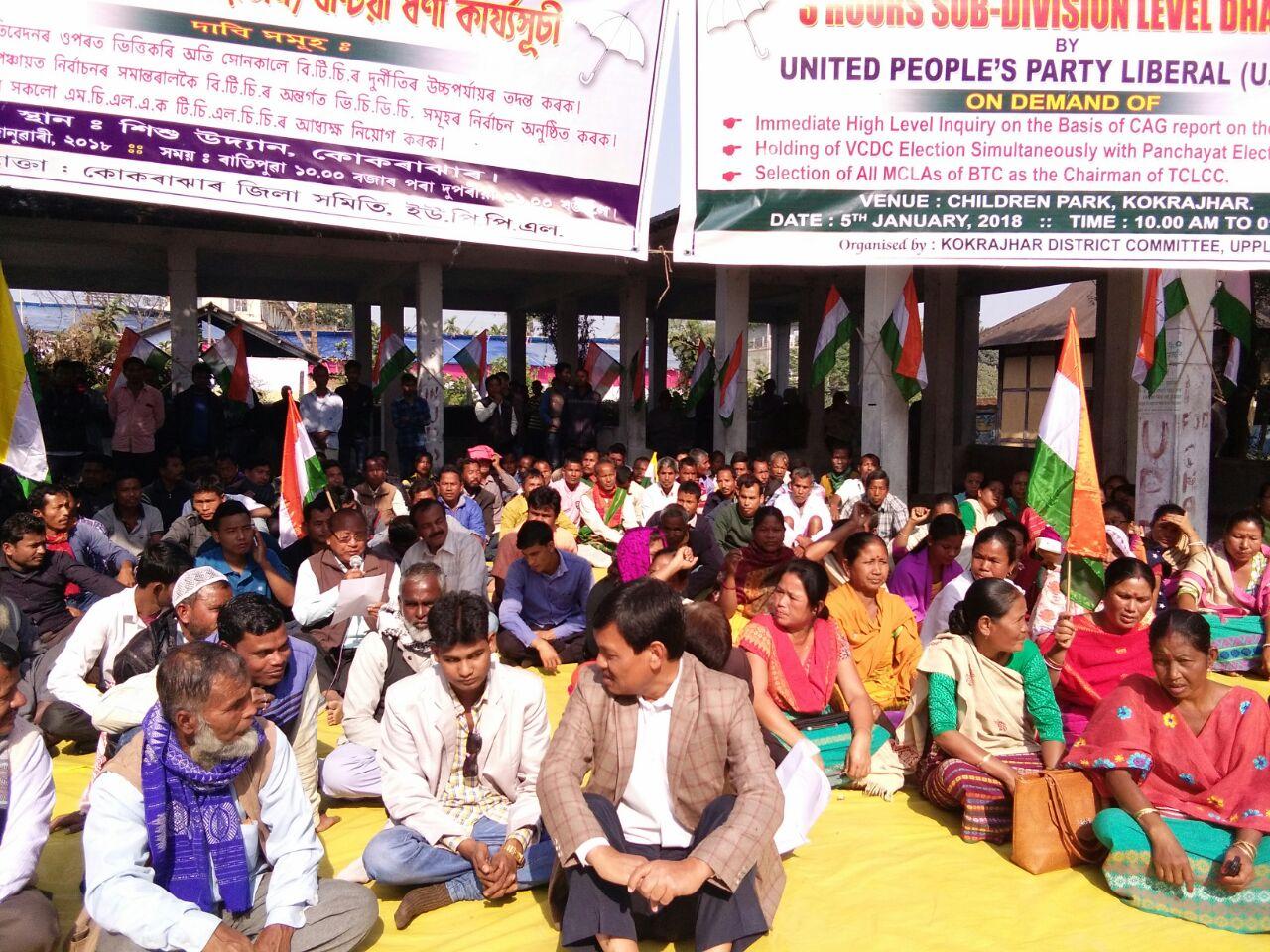 Kokrajhar, Jan 5: The United People's Party-Liberal staged a 3 hour sit-in-demonstration near DC office in Kokrajhar on Friday seeking immediate high level inquiry on the basis of CAG report on the BTC, holding of VCDC election simultaneously with Panchayat election in Assam, selection of all elected MCLAs of BTC as the chairman of TCLCC.

Hundreds of party leaders and supporters with banner, placards participated in the demonstration and shouted slogans demanding a high level inquiry into financial irregularities and anomalies which was unearthed by the CAG of India in BTC administration, conduct VCDC elections simultaneously with Panchayat in the state.

The UPPL alleged that over 1000 crores of financial irregularities have been reported in the council which was unearthed by CAG report.

A memorandum was submitted to Prime Minister Narendra Modi through Kokrajhar Deputy Commissioner seeking early investigation on the CAG report over financial anomalies in BTC council.

Huge financial irregularities and anomalies that was unearthed by the Comptroller and Auditor General (CAG) of India in the Bodoland Territorial Council (BTC).

The CAG report for the years 2008-09 to2013-14 of the BTC has already been submitted under paragraph 7(4) of the sixth scheduled to the constitution of India in the BTC Assembly on 29th August,2017.

The CAG has done audit over all departments of the BTC together with the sum of ₹1469.09 crores and unearthed multi-crores rupees abnormality counting to the tune of minimum 180 crores, only under the Chief Discretionary(CD) fund.

The party expresses their anguish and dissatisfaction through the sit-in-demonstration over the gross financial corruption committed by the BTC administration. The party also expresses our resentment for not doing any appropriate actions from any appropriate authority for investigating the matter after elapse of long three months also.

UPPL president UG Brahma while participating the protest demonstration demanded early inquiry into financial anomalies in BTC which was unearthed by CAG. He has alleged that over 1000 crores of financial irregularities have been reported in the council.So, it is very urgent for investigation into council administration.

26 Feb 2013 - 9:43am | AT News
The World Bank will help Dispur improve public service delivery and governance of government departments. The government and World Bank are set to initially provide technical assistance, which will...

20 Oct 2014 - 8:00am | AT News
Ranjan Daimary is likely to get bail again. The NDFB boss who has languishing in jail for the last two months is likely to be granted the bail on October 21 when the TADA court will be considering...

26 Aug 2012 - 1:44pm | editor
Ending all speculations Dr Himanta Biswa Sarma resumed duty in Dispur on Saturday. Dr Sarma who withdrew his resignation on Friday signed a few NRHM files at his office on Saturday. But he refused to...