GUWAHATI:A mild 4.0 intensity earthquake has shaken Assam and it's neighbouring north eastern states striking no less panic among the people on Friday.

Originated in Karbi Anglong district, the tremor was felt at 12.40 noon forcing the people in the high rise buildings to the open space.

The panic stricken Guwahati denizens in the flats and towers started coming down gearing a massive quake.

There is no report of any casualty so far in the quake. 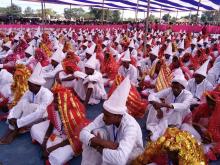 23 Jul 2011 - 2:24pm | Stuti Goswami
I have often seen your car speed away, especially on holidays-- shredding the city’s melancholic dusk… or some stifling evening. Your glitzy cars sprinkle on the passers-by the...