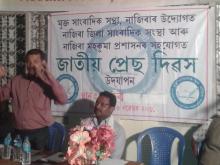 17 Nov 2013 - 10:34pm | SK Hasan
In association with the Civil administration and District Journalist association, the Freelance Journalist Association of Nazira colourfully observed the 47th National Press Day at its office on last...

17 May 2014 - 8:43am | AT News
In a major development that indicates an imminent repatriation of Anup Chetia, the jailed ULFA leader in Bangladesh has sent his family members to his ancestral home in Dibrugarh.Chetia’s wife, son...