The 3rd edition of the "Global Tobacco Treaty Action Guide 2008: Protecting Against Tobacco Industry Interference" was released earlier this week in many countries including India, during International Week of Resistance (IWR) to tobacco transnationals (22-28 September 2008). The Global Tobacco Treaty Action Guide 2008 is produced by Corporate Accountability International [which is in official relations with the World Health Organization (WHO)], along with the Network for Accountability of Tobacco Transnationals (NATT).

The need for IWR was never so acute – when on one hand government of India is resolved to enforce the nation-wide ban on smoking from 2 October 2008, the tobacco industry and others including ITC ltd and Indian Hotel Association, have challenged these smoke-free policies in the court of law.

Secondhand smoke, also know as environmental tobacco smoke (ETS), is a mixture of the smoke given off by the burning end of a cigarette, pipe or cigar and the smoke exhaled from the lungs of smokers. It is involuntarily inhaled by nonsmokers, lingers in the air hours after cigarettes have been extinguished and can cause or exacerbate a wide range of adverse health effects, including cancer, respiratory infections, and asthma. Secondhand smoke has been classified by the Environmental Protection Agency (EPA) as a known cause of cancer in humans (Group A carcinogen).

Despite of such overwhelming evidence, the industry is hell-bent to choose profits over people.

Tobacco kills 5.4 million people around the world each year. Tobacco is a risk factor in six of the eight leading causes of death worldwide. The death toll is projected to rise to eight million a year by 2030, with 80 percent of those deaths occurring in developing countries. If current trends are not reversed, tobacco will claim one billion lives this century. 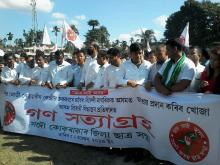 9 Jan 2010 - 9:08pm | bonbon
The very first evidence of a new life forming in all mammals is first felt by the female counterpart, in whose womb the life starts growing. Human beings are no exception to it. After nine months...