Pall of gloom in film world as star actor departs

GUWAHATI:Biju Phukan is no more. The promising Assamese film personality breathed his last at a Guwahati based hospital suddenly at 6.15 in the evening leaving a pall of gloom across the state.
Born in 1947 in Dibrugarh, Phukan started his career in cinema in 1970 in Dr Bezbaruah which evoked national award and since then he has been doing these in nearly 90 films and very recently he was playing a role in the Under World which is still in the making.

Film personalities across the state are shocked to have learnt the sad news of his untimely demise. So also his fans who loved him very much.
Veteran actor Nipan Goswami said," it's very shocking. I find it difficult to believe it. Never did I expect that he would leave us suddenly."

Purnima Das, one of his fans said,"I saw him for the first time in my life in the Assamese film Buwari. The film started with a song mon hira doi cycle nohoi tilinga...found his role very astounding indeed. May his soul rest in peace."

Keshav Deka, another fan from Barpeta said," Biju da will be shining like the pole star in the world of Assamese cinema."

14 Sep 2015 - 2:16pm | Chow Bilaseng Namchoom
One day Media and Communication Workshop of Pentavalent and Inactivated Pollavirus (IP) Vaccine under Routine Immunization Programme for DIPROs to be conducted at ATI Naharlagun on September 17.... 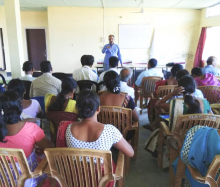 8 Nov 2017 - 11:29pm | AT News
A boomtime for bee keeping awaits Sivasagar district. At least 50 farmers participated a training on commercial Bee Keeping on Wednesday. The training was organized under RKVY where Bakul Saikia,...

20 Feb 2015 - 10:33am | Mowsam Hazarika
The agriculture department steals the show receiving the Krishi Karman Award for its achievements in the field of pulse production in the year 2013-14.Prime Minister Narendra Modi formally presented...