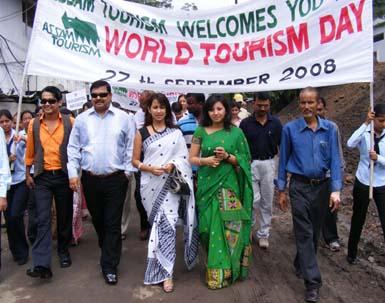 The Assam Tourism Development Corporation (ATDC) today celebrates the World Tourism Day like the other years at Guwahati and rest of the state.

Organising an awareness rally with film personalities like Nipon Goswami, Barasha Rani and Nishita along with the state Forest and Tourism minister Rockybul Hussain and MC Malakar, CCF Assam, ATDC stated a new techinique of tourism. The rally is flagged off by the minister supported by the school children and children of SOS village, a home for destitute kids and eminent film personalities. "With its diverse floras and faunas, Assam is tops on tourism map and the state assembly is going to pass new resolutions in the next cabinet to uplift the tourism industry for the first time. We made new constitutions and new budget for the industry and it will include all the institutes related to the hospitality industry", announced Rockybul Hussain.

Declaring the state as a heritage site with unique tourism potentiality, DONER minister Mani Shankar Aiyer welcomed visitors to invest in the tourism sector a few days back during the 4th NE Business Summit 2008. Following this instructions, the state Government has pulled out new policies to make the tourism industry of the state a new platform for revenue generation and employment solutions. "We have a growth of tourist at around 38 percent since 2001 till date and we hope with the recent developments it will grow to the highest ever within next few years to come. Our new venture of Cottage tourism has already picked up interest in tourists", said minister Hussain.

While the film artists participating in the awareness camp staged road shows to generate awareness among public and said that cinemas can obviously help the tourism industry as Assam has locations to shoot for movies than other parts of the country. The artists insisted the Assam Government and the public to make an static arrangement for the preservation of the national heritage like Rhinos and Majuli and Deepor beel. Speaking on the migratory birds den, Deepor beel's devastating situation, the minister Rockybul informed that the state Govt. has passed new policies to protect the wetlands of the state which will include public-private partnership (PPP) effort for the first time.

However the film personalities and the participants also request the minister to make solid step and make arrangement to save Asia's biggest river island Majuli in a better way.

Permalink Submitted by Plabita on Sun, 07/12/2008 - 03:05
Can we expect the State machinery to celebrate the World Tourism Day in a constructive manner rather than the state tourism minister strutting with actresses on the streets announcing policies which will soon drift into oblivion.We have failed miserably in marketing Assam as a destination and every citizen of this state should be an ambassador of the state.Its a welcome move that the Govt is encouraging public-private partnership but one only hopes this too does not turn into an unholy- nexus for siphoning funds.

17 Sep 2015 - 10:32pm | Hantigiri Narzary
Police on Thursday got remand of Amitabh Sarma for three days after the PWD engineer in Chirang district was arrested in connection with a Rs 1.5 crore scam in the department. Before that he was...