GUWAHATI:After a huge gap of one year tiger terror is back to haunt Guwahati. Four persons sustained injury when a full grown tiger which was believed to have come down from the hill side in search of food launched a series of attacks in Dhirenpara area in the morning.

Local denizens with the help of forest officials managed to keep the animal confined to a local school building for a couple of hours.

Later it was tranquilized and rescued. The injured people have been undergoing treatment at the Guwahati Medical College Hospital.

Tigers have been striking panic in the premier north eastern city at regular intervals during the last couple of years. 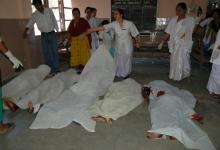