DIPHU:A major train mishap was averted much to a major respite for hundreds of people who were to Guwahati in Nagaland Express on Saturday.

The Guwahati bound train from Dimapur suddenly stopped near Nilang in Diphu since the driver raised doubt over a portion of rail lines.

After halting the train for a while he talked to the authority and security forces who spotted a damaged portion on the tracks.

"Unidentified miscreants took away some plates from the tracks just before the arrival of the Nagaland Express. The mishap was averted only because of the driver," said a Northeast FrontierRailway over telephone from Guwahati.

Workers from Diphu, Dimapur and Guwahati rushed to the spot and took nearly took five hours to restore the line.

"A huge respite indeed. We are traveling to Chapormukh and we remained safe only at the mercy of the driver whose caution and care saved us from an impending disaster," said Tanmoy Saikia, a passenger.

18 Sep 2017 - 1:50pm | AT News
At least 15 people were feared to have met watery grave along the Assam-Meghalaya border when a boat carrying them on a river capsized under the impact of a huge storm on Sunday.  The...

15 Oct 2009 - 12:06am | editor
The Guwahati Press Club has arranged an informal interactive session of the city-based journalists with the veteran lady journalist Sabita Goswami on Saturday, October 17 at 11 am. Smt Goswami is the... 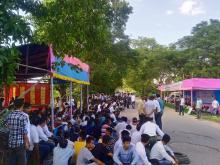