NEW DELHI: Amid an escalating protest in Assam, Arunachal Pradesh and Manipur over the greater Nagalim, Union home minister Rajnath Singh is hunkering down with Sarbananda Sonowal and TR Zeliang in New Delhi on Monday.

The basic subject, in all probability, will be the demand for inclusion of the Naga dominated areas in Assam in the greater Nagalim where the Centre id believed to have been playing a mysterious role over the last two years.

"This is what the main demand of Nagaland and its people. The Naga inhibited areas in the neighbouring Assam, Arunachal Pradesh and Manipur must be included in the proposed greater Nagalim for a lasting solution to the decade old vexed political problem. There is no option," said a Naga leader who is expecting a positive outcome of the meeting slated for Monday.

The Union home minister is giving an opportunity to the Assam chief minister to clear his position since Sarbananda Sonowal recently outrightly brushed aside the possibility of leaving even an inch of land in the name of the Naga political issue.

For the last couple of months, Nagaland chief minister, political leaders and the various civil society leaders have been mounting pressure on the NDA government to settle the issue before Christmas which could help BJP come to power in the assembly polls early next year.

30 Mar 2011 - 2:22pm | Smrity Rekha Kalita
A straight contest among Congress-BJP-AGP are on the cards a 120 Naharkatia LAC of Dibrugarh District in first phase election to be held on April 4. Current MLA Pranati Phukan, AGP Naran Sonowal... 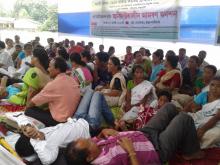