The All Bodo Students’ Union(ABSU) on Saturday declared results of 4th central talent search examination-2017 at Bodofa House in Kokrajhar, which was conducted by the students’ union on October 8 in 173 examination centres across the state for class IX and X students for Bodo medium.

The spot holders will be awarded cash 10,000,7000 and 5000 along with citation for first,second and third respectively during the ABSU's Sonitpur session in 2018 next.

Deepen Boro,vice-president of ABSU declaring the results said that the ABSU every year has been conducting the central talent search examination to find out talent children in the state.

A total 10,200 candidates appeared in the examination out of 12,836 applied candidates in 173 centres across the state. The talent search examination was conducted in smooth and thorough strict discipline in the state where students seated with competativeness environment.

‘The talent search examination has been gaining up good educational environment among Bodo medium students in the state.It has been getting good response from the students as well citizens’,Boro said. 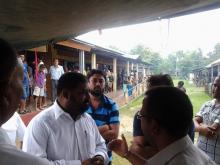