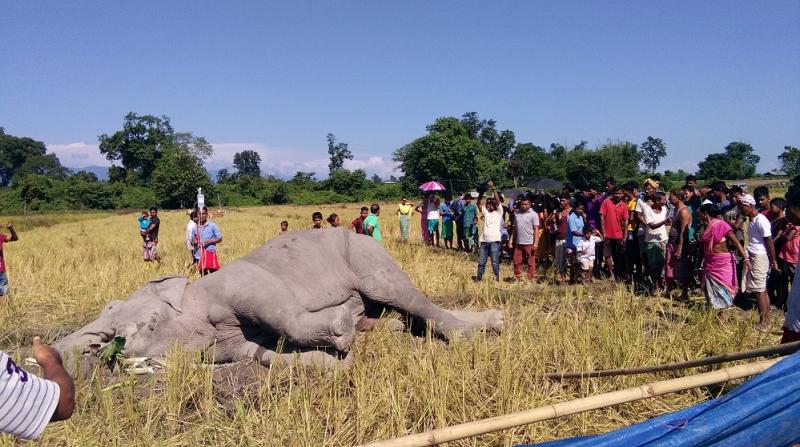 An adult elephant is engaged in a grim battle with death at a pit in Gossaigaon after it sustained injury on Thursday.

Villagers busted firecrackers to disperse these deadly animal to protect the paddy field where one of the elephants was caught in a deep pit.

Forest officials and doctors of IFAW-WTI rushed the spot in the early morning and rescued the elephant from the muddy spot.The elephant was found on serious injuries on his left body and noticed marked of 3-4 rounds of bullet riddled on the back body.

Doctor from International Fund for Animal Welfare-Wildlife Trust of India(IFAW-WTI), Kokrajhar rescue centre rushed the spot and given first aid treatment to the injury elephant.The elephant face critical condition of health so far. The condition of the elephnat is not so good as seeing critical till now.

Experts have also arrived at the spot to provide speedy recovery of injury elephant and necessary measures are on to make recovery of elephant.

Doctors from IFAW-WTI have been initiating necessary medical treatment for the injury elephand and taking stern measure for recovery from ill health.

‘Condition of the elephant was not so good,still face critical.Best effords are being initiated to make early recovery injury elephant’,he said.

29 Jul 2012 - 3:10am | editor
The situation in the violence-hit Bodoland Territorial Area and Dhubri is by and large peaceful. There is no report of any fresh incident on Saturday. Army on Saturday staged flag marches in the...