BJP leadership at the Centre have asked the party leaders in Assam to gear up for the next Lok Sabha polls with clean image and dedication for the common people.

In his address at the party executive meeting in New Delhi on Monday, prime minister Narendra Modi said the party in rank and file must ensue that the government schemes and initiatives should percolate benefit for the people.

He further asked the MPs and MLAs to remain in constant touch with thr people who can share their ideas with them at east. All MPs and MLAs remain present in thr extended executive meeting.

Party president Amit Shah, Ram Madhab, Mahindra Singh were also present in the meeting where the party legislators vowed to ensure victory in the next Lok Sabha polls. 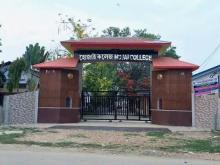 18 Apr 2015 - 9:08am | AT News
The Central Bureau of Investigation probing the ponzi scam has named Matang Sinh along with two others in the multi crore scam. The CBI special team dealing with the case filed its chargesheet...
Follow @Assam Times