Three persons have been injured when they tried to prevent some miscreant from kidnapping a businessman in Barpeta in district on Thursday night.

According to information, the incident took place at around 9 in the evening. A few miscreants who came on two motorcyles stopped at Majgaon under Howly police station and forcibly lifted one Surajna Mandal,a local businessman from his shop. Some local residents who came out to the streets started clamouring and some others came out to the street. Some of them tried to intercept the miscreants. The miscreants fired upon these people but the Suranjan jumped off the speeding motorcycle while the miscreants could not afford to came back.

One Dwipen Nath sustained bullet injury when he tried to prevent the miscreants from proceeding. He was later shifted to the Guwahati Medical College Hospital. His condition is said to be stable.

Normalcy back to violence-hit BTAD

1 Sep 2012 - 3:37am | editor
Life in BTAD areas and Dhubri district is rapidly limping back to normal. The last 48 hours are incident-free where curfew has been temporarily lifted from dawn to dusk. Same it is in Tezpur, Howly... 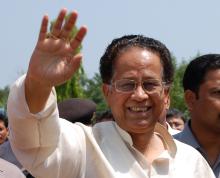 23 Nov 2020 - 6:07pm | AT News
Guwahati: Veteran Congress leader and former Chief Minister Tarun Gogoi is dead. He passed away in the evening at Guwahati Medical College Hospital where he was undergoing treatment of post COVID...

28 Jan 2013 - 6:24pm | Anup Biswas
Busu or Bisu, the prime festival of the people belonging to the Dimasa community is being celebrated throughout the district of Dima Hasao district with great enthusiasm from January 27th.At Haflong...