According to eye witness,a group of two-four unknown miscreants wearing black clothes entered the temple near Kokrajhar railway station and brutally muredered the priest in the wee hours.

According his sons, apart from performing pujas at the temple, their father dealt in lottery at daily bazar in Kokrajhar town. Thr miscreants stormed into the temple as soon as he completed the puja.

‘Main involved culprits would be nabbed in immediate’, said Rajen Singh,Kokrajhar SP. Additional DGP Mukesh Agarwal visited the temple in Kokrajhar town in thevevening, was accompanied with Anurag Agarwal,BTAD(IGP) to take stock about murder case. He said that priest was killed for money by miscreants late wee hours.

Agarwal arrived in Kokrajhar by 5 pm in the evening to visit thr temple following the Chief Minister’ directives to take stock of the incident.

He said that Nikhil Debnath used to go West Bengal every Sunday for depositing lottery’s money as sold lotteries in his locallity. .

Agarwal also said the miscreants looted nearly ₹ 2.5 lakh from the priest besides took away a mobile and snatched away of gold chain from his wife. He has expressed his hopeful that culprits would be booked immediately. 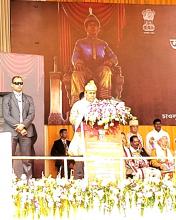 9 Dec 2015 - 11:21pm | Manas Jyoti Chutia
Members of TMPK, Lakhimpur District Committee and KMSS have demanded to stop an ongoing construction of a coffer dam installed over the Subansiri River. The coffer dam is being built to divert and...