Scribe shot at in ultra attack

20 Jun 2015 - 3:32pm | AT News
In yet another attack on media, suspected NDBF(S) militants shot a journalist in their captivity in Udalguri district sending shock and anger across the state.The incident took place on Saturday wee...

4 Sep 2014 - 10:09pm | AT News
Haflong escaped a huge explosion incident when security forces recovered a huge quantity of explosives from a train on Thursday. The explosives were found at Lower Haflong Railway station in Dima... 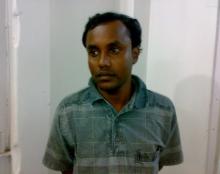