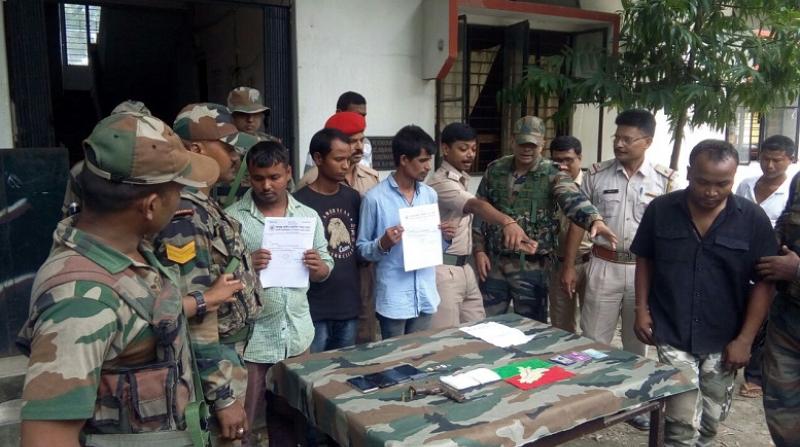 A week ago, two cadres of another militant outfit little known as National Freedom Fighter of Bodoland(NFFB) were arrested from Goeswar of Baksa district while they were coming to collect extortion money from a businessman.

A joint team of Assam Police and Army, carried out a search operation in the Senigaon village near Goreswar on Thursday where four members including chairman and a commander of the newly floated militant out organization little known as UIAAA were arrested. They were identified as Mintu Sinha(chairman),Hitesh Bezbaruah(one of commander),Hitesh Kalita and Munindra Patowary(cadres).

More operation would be carried out in the region to find out main root of the militant outfit organization and investigation is on, said a senior police official in Baksa district.

‘The newly floated armed organization has been trying to serve extortion notes from the government employee, businessmen, common citizens in the region. They were apprehended in a joint operation carried out in the Baksa district’, he said.

11 Jun 2020 - 9:44am | AT News
Aaranyak’s concern on oil leakage and fire at Baghjan in Tinsukia District Guwahati, 10 June, 2020   Aaranyak, an organization working towards biodiversity conservation in Northeast...

8 Sep 2009 - 1:31am | editor
Assam is throbbing with the celebration of the 83 birth day of Asom Ratna Dr Bhupen Hazarika across the state even as the Dada sahib Phalke award winning film maker is spending the day with the...