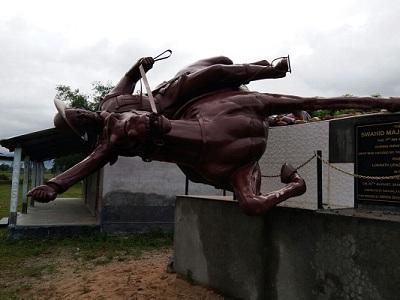 The statue of Indian freedom fighter Durga Malla was vandalized by some unknown miscreants at Khourang on Tuesday night. Ramesh Dahal, the president of Udalguri district committee Assam Gorkha Sanmilan, vehemently protested against this, calling it an instance of hate mongering. The police administration must enquire into the incident and book the culprits, he added. Somraj Sonar, the vice-president of Udalguri district committee of All Assam Gorkha Students’ Union, also condemned this incident. He said that Durga Malla was not only a Gorkha but a freedom fighter of India. The district administration must book the miscreants behind this incident within 24 hours otherwise the organization will launch mass agitation, he warned.

Widespread condemnation and deep anguish prevailed among the Gorkha community people in the region following the incident. Prodeep Kumar Daimary, the general secretary of UPPL(L), condemned that incident as an act of cowardice and also demanded enquiry into the incident. He also appealed to the people of the region to maintain peace and understanding between themselves. This incident has jolted the faith of the Gorkha community at a time when the ABSU, NDFB(P) and others are raising their voices in support of Gorkhaland movement in Darjeeling.

6 May 2014 - 7:53pm | AT News
A lower court in Barpeta on Tuesday remanded 14 persons to 3 days police custody three days after police picked up them from Baksa and Kokrajhar in connection with BTAD violence.Seven of these people...