A pall of gloom grips Meghalaya when nine people  died during the last 24 hours since they ate rice packed with pork and chicken served at a church function in Ri Bhoi district on Sunday. More than 250 others have been receiving treatment in the various hospitals in Ri Bhoi and Shillong.

Around 2000 people from ten villages in the district thronged the church premises of Nongya village on Sunday where they were served rick packed with chicken and pork in the afternoon.

Hours after those,mostly, ate rice with packed pork complained of vomiting and loose motion to be rushed to the hospitals where three people died at night. Six others died on Monday and Tuesday.

The government has set up a medical camp in the village and ordered a magisterial probe into it. The officials proving the tragedy have collected yhr food and water samples to be sent to the forensic laboratory. 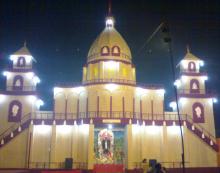 No place for vulgar songs

30 Dec 2017 - 11:13am | Mithun Baruah
TINSUKIA: An upcoming cultural function in Tinsukia strikes no less controversy across the district forcing the authority to step in. The crux of the controversy is the singer who is invited to...

22 Oct 2011 - 4:56pm | editor
Properties worth ten lakhs have been reduced to ashes when a devastating fire broke out in Guwahati city on Saturday. The incident took place at Solapara area near Paltanbazar police station where...