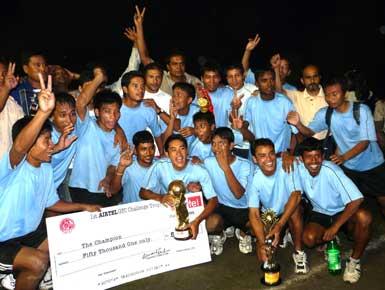 In a tie-breaker shoot out Assam State Electrical Board (ASEB) beat Jewel Star 5-4 after the match got drawn in the stipulated 90 minutes and became Champion of the 1st Airtel GTC Soccer Challenge Trophy here at Judges Field, Guwahati. Moni Kanta Brahma the captain of the ASEB scored at the 26th minute of the 1st half while Centre half of Jewel Star team Subasish Nayak leveled the score at the 39th minute of 2nd half. Organised by Guwahati Town Club the 2nd oldest club of the nation after Mohan Bagan to mark its centenary celebrations in association with Airtel.

15 Nov 2015 - 12:10pm | CM Paul
A university community in northeast India has become a trend setter in offering development communication services when its students of the Schools of Technology and Social Sciences decided to reach...

28 Jul 2017 - 11:41pm | AT News Guwahati
Assam’s well known Dispur Hospitals will conduct the evening OPD clinic at Guwahati Press Club on 29 July, where Dr Udayan Saikia will be available for free consultations to media persons. The...