The Manipur Congress on Sunday condemned the Central government’s new rules banning cow slaughter or consumption of beef in the country.

“We condemn the general campaign against cow slaughter or consumption of beef. The move has hurt the sentiments of Muslim and tribal communities of the state,” Manipur Pradesh Congress Committee (MPCC) spokesperson Fazur Rahim told a press meet here at the Congress Bhavan.

The campaign has targeted the minority groups in Manipur, especially the Muslim and Christian communities, he said.

In Manipur, Muslim and tribal population are enthusiastic beef eaters. On the other hand, Hinduism exhorts not to slaughter or consume meat.

The Centre has already banned the sale of cattle for slaughter, but the move has met sharp reaction and condemnations, particularly from the Christian and Muslim majority states in the country

Rahim said the NDA government’s ban on sale of cattle for slaughter was a dictatorial policy.

The MPCC spokesperson further called upon the people to condemn the Bharatiya Janata Party (BJP) over the ‘anti-Muslim and Christian policy’ and to root them out.

2 Feb 2012 - 11:42pm | Anup Biswas
In a joint search in the Up Barak Valley express at Lower Haflong station in Dima Hasao district of Assam, the GRP, RPF and train escort party recovered huge quantity of explosive in two... 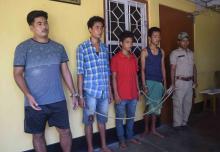 30 Aug 2010 - 3:22am | editor
There is report of gunbattle between a group of poachers and forest guards Morigaon district on Sunday. But no casualty has been reported. The forest guards of West Dharamtul forest range led by...