Woman shot to death in Moreh; bandh called to protest

A middle-age woman has been shot to death by unidentified gunmen at Tengnoupal district’s Moreh town bordering Myanmar on Monday.

The deceased has been identified as Ningombam Shanti Devi. She is said to be a labourer.

According to reports reaching here, the fatal shooting happened near Indo-Myanmar border Crossing Gate No.2, known as Namphalong gate around 4 pm.

Two motorcycle borne masked gunmen opened fire at near Namphalong approach road when the woman was hit by bullets. She received 11 bullets in the incident.

The woman was critically injured in the shooting following which she was rushed to Moreh Government Hospital where she succumbed.

But Moreh hospital sources informed that she died on the way to the hospital.

It is reported that the gunmen pumped 11 bullets into different parts of her body and fled the scene.

Superintendent of Police, Tengnoupal, Salam Somorjit and other police officials including Officer-in-charge Moreh police took stock of the situation.

The decision was taken during a joint meeting of different social organisations over the incident. 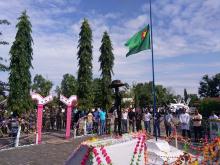