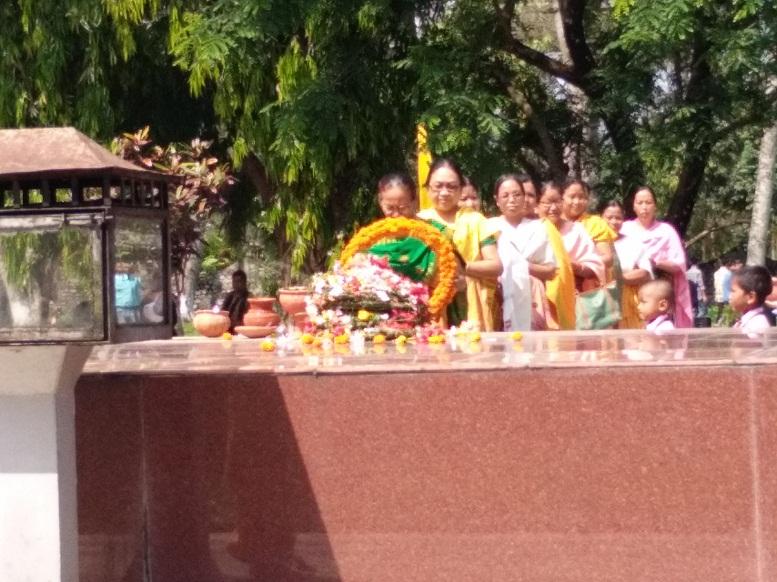 Former Rajya Sabha MP and former president of the All Bodo Students’ Union (ABSU) Urkhao Gwra Brahma alleged that the Thulunggapuri,burial place of late Upendra Nath Brahma,former president of ABSU has yet to meet healthy development welfare even though passed 27 years of death of Bodofa UN Brahma at Dotma in Kokrajhar.

The anniversary was observed at his burial ground at Thulunggapuri in Dotma to mark his contributions towards Bodo as well down trodden communities in the country.

As a mark of respect, ABSU speaker Jayanta Basumatary hoisted the organisation’s flag half-mast in the morning in the huge presence of students,community leaders from different party and organisations. Sameswar Brahma,elder brother of late Brahma paid floral tribute to Bodofa UN Brahma at his burial ground followed former Rajya Sabha MP Urkhao Gwra Brahma,Assam forest minister Pramila Rani Brahma,former MLA Pradip Kumar Brahma. Upendra Nath Brahma, regarded as “father of the Bodos”, was born on March 31, 1956, and died on May 1, 1990. As a student leader, Brahma spearheaded the “Bodoland” movement with the mantra “live and let live”. In his tenure as ABSU  president, he had worked towards the fulfilment of the Bodo’s demand for a separate state.

Brahma said even though Bodofa’s death has passed 27 years,yet its memorial ground Thulunggapuri,Dotma to meet healthy development due to insincerity from BTC administration as well state government. The ABSU and UNBT are observing the days every year to recalled his contributions towards uplift of Bodos and down trodden communities.

‘We have urged the state government as well as the BTC administration to include Brahma’s birth anniversary on the government holiday list but so far there has been no response’,Brahma said.  He said that Bodofa as a student leader had brought about remarkable changes in the lives of the downtrodden through the Bodoland movement.

‘He was a leader not only for the Bodos but also for the students and the underprivileged. He dreamt of a literate society. He is among the greatest visionary leaders of the Bodoland movement and an icon of leadership, sacrifice and unity’,Brahma added.

‘Today I remembered him on his death anniversary at Thulunggapuri and paid floral tribute him on his burial ground’,minister Brahma added.

17 Oct 2012 - 12:48am | editor
A 18 member gang of poachers who have been behind the killing of least ten rhinos in Kaziranga National Park over the past three years have been arrested.The gang leader Lyngdoh Rongpi was arrested...