"Politicians of country have resorted to self-centred politics there by amassing unaccounted wealth. The political corruption has deteiorated the sceneraio of politics . Though there exist polticians who are honest and are in the sphere for the cause of serving the mankind .One of such person was veteran politician and freedom fighter Bishnulal Upadhay. " This was the observation made by Dr. Dilip Baruah of Gauhati University here at Golmagaon High School of Udalguri on Sunday.

The memorial lecture which was iniated by speech of  Debraj Sapkota and anchored by Ram Upadhay of ANSS was also attended by Puspadhar Sarma Principal of Udalguri HS school. In his speech Sarma recalled the contributions of late Bishnulal Upadhay in freedom movement.  Others who spoke on the ocassion include Dr. Khagen Sarmah from Gauhati University. The Nepali translated version of state anthem O' Mur Apunar Desh was also sung on the ocassion.

Secretariat to resume work from Apr 21

19 Apr 2020 - 12:41am | AT News
Guwahati: Hours after the health authorities formally announced the steep decline in the number of COVID 19 patients, the state government is preparing to resumed functioning in the Secretariat from... 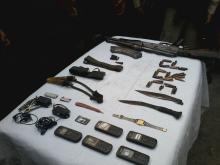