All Bodo Students Union (ABSU) and Upendra Nath Brahma Trust (UNBT) recalled contributions of Bodofa (Father of Bodos) Upendra Nath Brahma, a great leader of Bodo as well other downtrodden communities of the state and former president of the students’ union towards uplift of Bodos, on his 61st birth anniversary at Tulunggapuri, Dotma in Kokrajhar district on Friday.

A foundation stone was also laid to construct a children library at Boragari village,birth place of Brahma on the occasion,which is to be constructed by ABSU to facilitate reading and educational environment among coming up generation.

Bodofa(Ftaher of Bodos) Brahma,was a Master Degree with Science from a poor family,born at remote Boragari village in Kokrajhar district on March 31,1956, hold the responsibility of dedication to the Bodo and other down trodden communities through launching of democratic mass agitation demanded separate Bodoland state carving existing Assam, bringing total revolution in the society,besides creating peace and unity among all sections of community in the region.

Brahma, had dream of master race of Bodos and literate Bodo community in the world through which he had dedicated his whole life towards social uplift.

Promod Boro,ABSU president hoisted the union flag followed one minute silence condolence to mark the observation and an open discussion was also organised on the day.

Promod Boro,ABSU president said, ‘The ABSU and UNBT have been observing the birth anniversary of Bodofa UN Brahma every year on today’s day as ‘Students Day’. We recalled him with great respect,who had worked not only for the Bodos but for the down trodden people of the region’.

On the building of great Bodo society Boro said,‘We want Bodos to be advance society in the world’. He has urged the government to create early small states across the country including Bodoland separate to meet good and healthy administration.

Former Rajya Sabha MP Urkhao Gwra Brahma said, ‘Bodofa UN Brahma, who had established the Bodo, a great community the world. Dedication of Bodofa Brahma was rare for the community.We must respect ideology and philosophy of Brahma’.

Bodofa Brahma had dream master race of Bodos,besides demanded separate Bodoland state. He was a leader of Bodos and other down trodden communities for the caused of Bodoland,Brahma said adding that we must try to keep alive the thoughts and philosophy of UN Brahma to the nation as well as to the world.

‘The thoughts and philosophy of the then student leader Upendra Nath Brahma has brought a revolution among the down trodden people for their rights to live with dignity and self determination. Bodofa Brahma regarded as torch bearer of the Bodo peoples towards seeking separate Bodoland state and social change’, Brahma said.

13 Sep 2014 - 5:01pm | AT News
Amid tight security, polling passed off peacefully in Jamunamukh where 165,718 voters have sealed the fate of five candidates in the electronic voting machines on Saturday.The polling percentage is a... 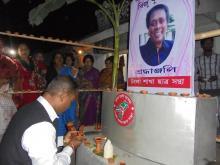