Freedom fighter, trade union leader and social worker of Nazira Benu Bhuyan breath his last at his own residence on last March 20. He was 85 and survived by his wife and son.

18 Dec 2007 - 1:33am | editor
Its a significant development in Assam politics inn the run up to the panchayat polls. The All Assam Muslim Council (AAMC) has withdrawn its support from the Asom United Democratic Front (AUDF)... 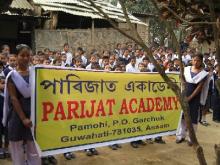