Two rhino poachers were killed and two others sustained serious injury when the car carrying them to Guwahati collided it's head on s bus in the outskirt of the city on Tuesday morning.

The accident too place early in the morning at Baihata Chariali where two persons were killed on the spot. The local residents' in large number thronged the spot and extricated two bodies from the mangled vehicle.

Then they  found a blood stained rhino horn along with a rifle, sharp weapon and some brown sugar packets'.

The injured people who were shifted after the accident have been battling for life at the hospital. Police have already reached the hospital to quiz the duo.

They were believed to have poached the rhino a couple of hours back either in Manas or Kaziranga as Baihata is a common route from all sanctuaries.

10 Oct 2014 - 10:19pm | AT News
A local court West Bengal has remanded six youths to 14 days police custody a day after they were arrested from Barpeta in connection with the Burdwan explosion. They have been nabbed on the basis of...

22 Jul 2008 - 7:10pm | editor
The game of numbers was never at its vulgar ebb as it is today. It is clear by now, more than ever before that electoral politics is nothing more than valueless and opportunistic arithmetic. Votes... 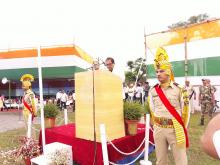