Nabajyoti Roy, assistant general secretary, AASU speaking to reporters on Monday in Kokrajhar said that the organization should not call any bandh in protest against incidents during on going examination across the state that has been occurred in Kokrajhar.

Roy said that student as well guardians are facing severe problems due to regular bandh called by some organizations in the district as HSLC/HS examinations are going on. He has urged organizations not to call bandh during ongoing examinations of HSLC and HS in the state.

District administration had been taking stern measures to make recovery of kidnapped Dutta since after incident in the district, said a senior official in Kokrajhar DC office. He has appealed organizations not to call any bandh during ongoing HSLC/HS examination in the state.

Guardians of students expresses serious concern over bandh called by some organizations in protest against kidnapping of Dutta, who is yet to meet recovery so far. The bandh called today, created communication crisis among students community as students have to face severe crisis of communication in the district while attending examination, said a guardian in Kokrajhar town.

9 Nov 2013 - 5:11pm | AT News
The Assam government is clearing the decks for updating NRC from December. Disclosing this at a press conference in Dispur, Chief Minister Tarun Gogoi said that the central funds for NRC works would...

22 Oct 2008 - 4:06am | Nanda Kirati Dewan
The 9th edition of the biggest annual shopping carnival of Eastern India International Expo 2008, Guwahati, organized by Leo Advertising in association with Grassland, Kaziranga, a unit of Leo, will... 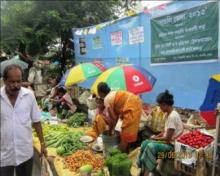