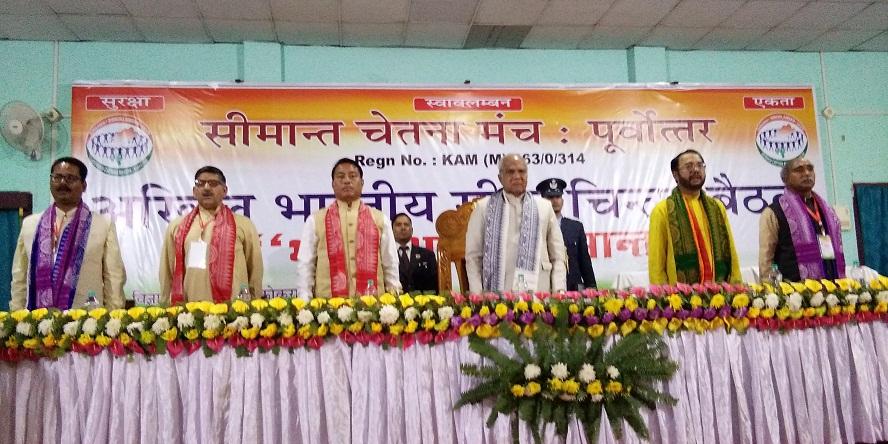 Governor Banwarilal Purohit has eyed healthy integrated society in the country with peace and unity among all sections of communities in the country. Purohit join hand in the Swachh Bharat Abhiyan on his concluding day of Kokrajhar visit, the initiative undertaken by the Kokrajhar district administration along the Bibekananda Path near Circuit House in Kokrajhar town on Wednesday in the presence of huge gathering,apart from students, senior citizens.

In his speech,Purohit said that India is country of multi-cultural and languages through which conutry is seeing united in its sustability in the world. He has urged citizens of the country should come forward to the building of healthy and pecaeful country. He said that peoples of the borders should be brought into highlight in education,social uplift so that country could gain well integrated.

Addressing the participants, he said that with the support of the people the messages of cleanliness have reached every nook and corner of the country.He has appealed to the citizens including women and students to actively participate in the endeavour of Swachh Bharat Mission and undertake responsibility of cleanliness of public places, own dwellings, work places, surroundings, localities, towns,  and villages as to protect ourselves from any diseases as well as to make India a clean country. He also called upon the Kokrajhar Municipality Board and the residents of the town to keep their town always clean and try to earn rewards for this in the state and national levels.

Purohit urged the BTC authority to develop the tourism sector in the area as to attract tourists from outside as it has tremendous scope in this direction as per its geographical location.

Kampa Borgoyary, BTC Deputy Chief graced as guest in the baithak. Borgoyary said that BTC region has close border with Bhutan,which has been keeping good communication and bringing friendship relationship with neighbouring country.He has apprecaited the baithak initiated by Seemanta Chetana Mancha,Purvottar to create awareness and bringing of social communication in the region.

Dr Kamala Kanta Saharia,president of Seemanta Chetana Mancha, Purvottar told that the mancha organised the chintan baithak to bring an awareness and communication among border resident along Indo-Bhutan border. Delegates from different states,those share borders with Bhutan and resource persons across the country are participating the baithak.

3 Jun 2015 - 8:32pm | AT News
Dr Bhupen Hazarika’s wife Priyambada Hazarika passed away after a brief ailment in the USA on Wednesday. According to information, the octogenerian former IFS officer breathed her last at 12.30...