Shankardev Shishu Vidya Niketan School at Dadara near Hajo is ready to get another facelift with the financial support from Guwahati Round Table 235, the Guwahati chapter of Round Table India (www.roundtableindia.org). The completed phase two section, comprising three classrooms, verandah & staircases with a total area of 2,750 square feet, will be inaugurated on 8 January next. Kamrup (rural) district magistrate Vinod Seshan has consented to inaugurate phase two part on Sunday in presence of district police chief PS Mahanta. “The foundation stone for development was laid on the 7 February 2016, where the project was planned to be completed in a phased manner with the first phase has already been completed. It was inaugurated by Assam education minister Dr Himanta Biswa Sarma,” informed Parveen Goyal, chief of Guwahati Round Table 235.

Addressing the media persons on Wednesday, Goyal also added that they would soon start the construction of phase three and expected to get it completed by the end of 2017. He described his mother organization as a non-religious and non-political entity. The Round Table India has over 4,500 chapters across the country comprising young businessmen, entrepreneurs, technocrats and other professionals. Mukesh Chokhani, secretary to the Guwahati chapter of Round Table India disclosed that they adopted the Dadara Shishu Niketan school under its flagship freedom through education project. He also added that they planned to develop around 10,500 sqft in the school premises with a total outlay of rupees 80 Lakhs.

Project conveners Avishek Kejriwal, Shwet Agarwal, Rahul Sethi with few others were also present on the occasion. Soon after the press meet the Guwahati Round Table 235 office bearers donated two galvanized steel chairs for Guwahati Press Club, which were accepted by the GPC secretary Nava Thakuria in presence of other member-journalists.

18 Feb 2012 - 2:58am | editor
Assam Chief secretary Nava Kumar Das has been admitted to the Guwahati Medical College Hospital on Friday when he complained of breathing difficulties in the afternoon. Doctors attending on him...

20 Apr 2013 - 12:46am | AT News
Call for SubmissionThe Northeast Green Journalism AwardHonouring outstanding reporting on the environmentAssam Times seeks submissions from mid-career/ mid-level journalists in the states of... 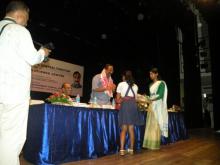