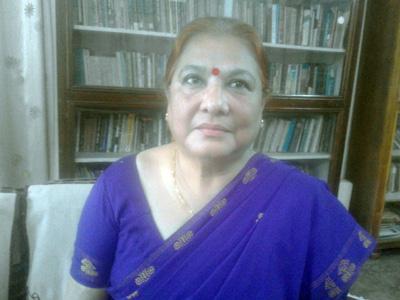 Novelist Dr Arupa Patangia Kalita has been selected for the prestigious Assam Valley Literary Award for the year 2016 instituted by Williamson Magor Education Trust. Expressing her happiness before newsman the Sahitya Akademi Awardee said, "I am elated to be chosen for the award. Writing is not a game or hobby for me. Pen should be used to portray the the different classes of society. She further added that, "Literature should reflect the happenings of the age which would remain to be read for generations to come."

Dr. Arupa Patangia Kalita was born in 1956 studied at Golaghat Mission Girls High School and Debraj Roy college. She did her MA from Gauhati University. She retired as an HOD Dept. of English, Tangla College on June 22 of last year. She also pursued her PhD. from Gauhati University on Pearls S. Bucks Women Characters.

Her novel, novella and short stories surounds questions concerning women and society. Her novels and short stories have been translated to many languages. Her writings have also been included in syllabus of many colleges and universities.

She has received many awards including Sahitya Akademi and penned 19 books consisting poetry and short stories. Some of her works include Mriganabi (1987),Ainanta (1994),Felani (2003),Tokra Bahor Sunar Beji (2014). Many organisations including Udalguri Sahitya Sabha,Bhergaon Koch-Rajbongshu Sanmilani,Tangla media forum among others have congratulated Kalita .

27 Jan 2017 - 2:09pm | Sanjoy K Kakati
Raha, the name of an area hemmed in between Nagaon and Morigaon districts of central Assam turned in to a mini north east when a local college took out a huge procession showcasing the region’s rich...

15 Aug 2010 - 9:20pm | Nava Thakuria
As usual, the journalists and citizens of Guwahati have celebrated country’s Independence Day at Guwahati Press Club. Defying the diktat of militants, who called for a 15 hour general strike...