he members of West Bengal Radio Club (Amateur Club) have launched a website to help the pilgrims, primarily the missing persons in the forthcoming Ganga Sagar Mela starting on 9 January next. The weeklong festival attracts thousands of devotees from different parts of the country and many of them fall victim of the situation.

The radio club has also installed its HAM Radio setup at Kanchuberia, Namkhana, Chamaguri etc to help the families of missing persons with correct information. Concerned Bengal administration and police forces have agreed to help the radio club to support in its endeavor.

25 May 2016 - 9:57pm | AS Tapader
The very term ‘National Highway’ brings to our mind, the vision of a broad well maintained road, with vehicles zipping past at high speeds. However, visit Barak Valley and the same term attains an... 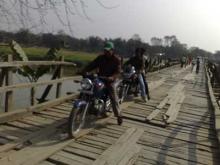 3 Sep 2016 - 7:51pm | Shajid Khan
Acting on a tip-off a team of forest officials of Dhansiri Forest Division and 37 Bn SSB seized a saw machine and cache of valuable timber logs at Jhargaon near Khoirabari of Udalguri district on...