Nagas take to agitating in Delhi 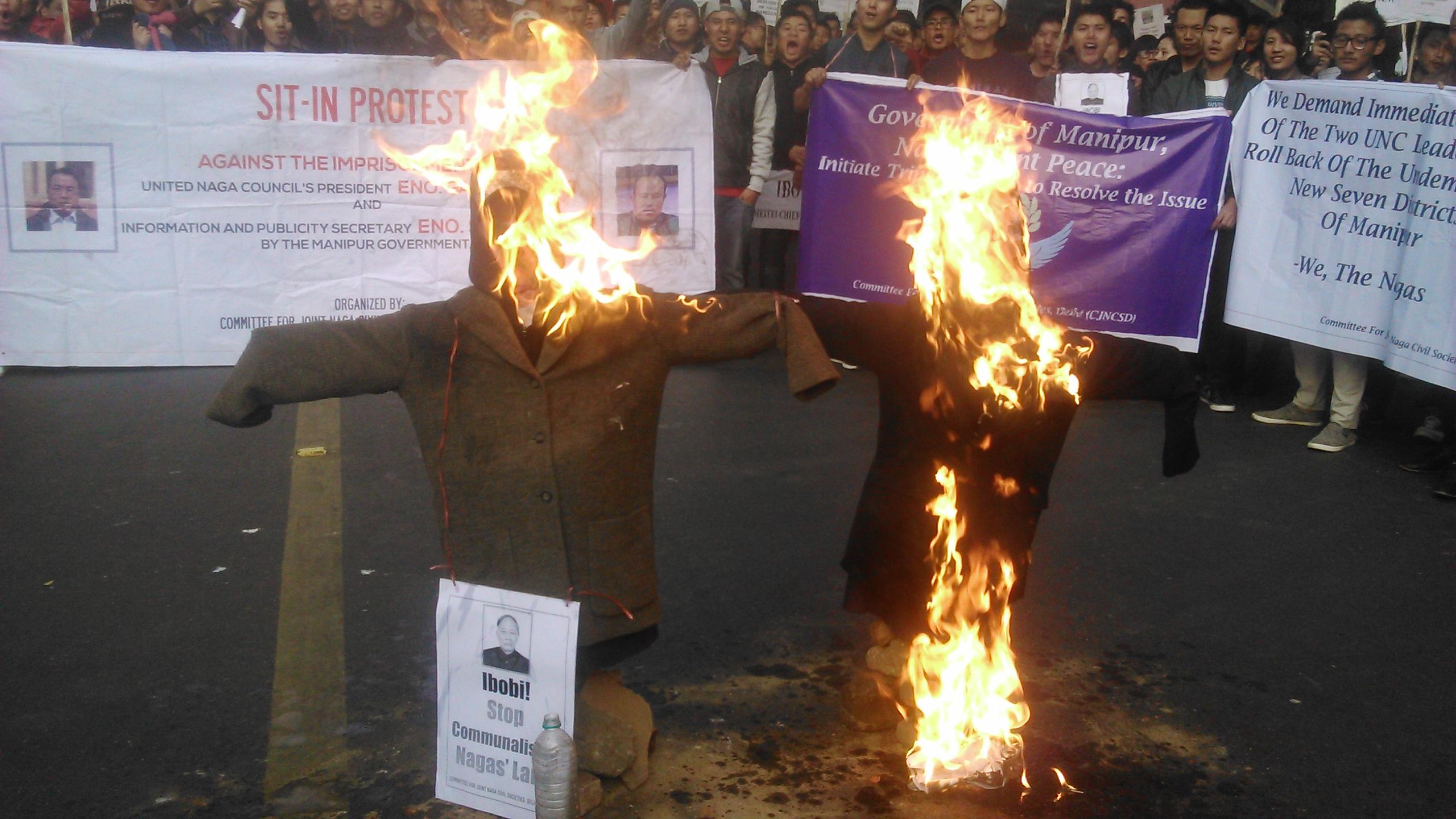 The Joint Naga Civil Societies, Delhi (CJNCSD) Friday organized a mass protest rally at Jantar Mantar, New Delhi to further intensify their protest against the arrest of the two United Naga Council (UNC) leaders and the unconstitutional formation of the new seven districts. Hundreds and thousands of Nagas thronged the streets of Jantar Mantar chanting "Nagas shall defend their land to the last man standing" and effigies of Ibobi and Gaikhangam were burnt down.

It slammed the Government of India for insidiously siding with the communally fascist and anti-Naga regime of Ibobi Government at the cost of the legitimate aspiration of the Nagas.

Nagas have been defending every inch of their ancestral land, liberty, identity and dignity with blood and tears since the mighty British times and dares the Government of Manipur to attempt to carve out even an inch of the Naga ancestral territory in the name of formation of new districts. CJNCSD reaffirms that the Naga issue is a political issue and vows to stand its ground with UNC till the unconditional release of the two incarcerated UNC leaders and rolling back of the proposed seven districts.

It goes on to claim that UNC has been observing partial peaceful shutdown along the national highway which absolutely is a legal and democratic form of protest.

However, communal Ibobi and paid valley-based media ingeniously coined the term "economic blockade" to criminalise the Naga political issue and illegally arrested the President and the Information Secretary of UNC.

CJNCSD submitted a memorandum to PM Modi reiterating immediate nullification of the creation of the seven new districts; unconditional release of the two UNC leaders; acceptance of the August 3 Naga Framework Agreement and   finalization of the Framework Agreement; imposition of President’s Rule in the State of Manipur; CBI enquiry into the December 18, 2016 communal violence against the innocent Naga civilian passengers at Imphal and immediate compensation for the victims.

7 Jul 2017 - 8:24pm | Akshaya Pranab Kalita
Namrup Music College is organising a Indian Classical Music Competition on July 23 on the occasion of its golden jubilee celebration. The schedule of the competition are vocal, tabla, violin and...

The Padyatra linking the land-rights, dignity and freedom

7 Jan 2008 - 9:12am | editor
The struggle against poverty must be linked with the ongoing struggles for land rights, restoring dignity to human life, and against the value system which makes most under-represented communities...