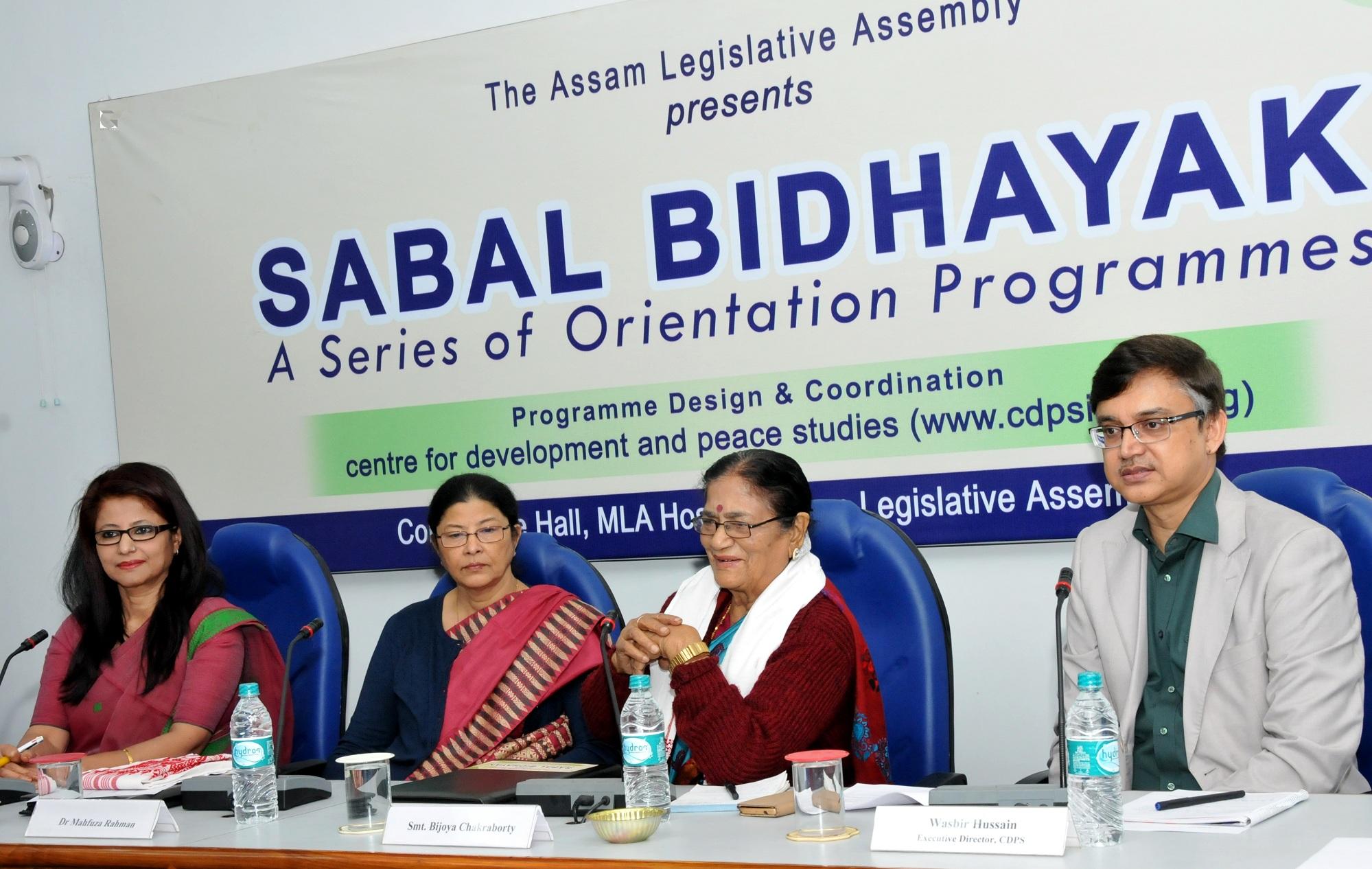 Experts called upon legislators in Assam to raise issues concerning women and children on the floor of the House, acquaint themselves with the existing provisions concerning their rights and engage in advocacy of matters concerning the welfare of women and children. The suggestions were made during the fifth phase of the ongoing Sabal Bidhayak held on Tuesday at Guwahati, a series of orientation programmes initiated by the Assam Legislative Assembly in collaboration with Guwahati-based research institute, Centre for Development and Peace Studies.

Addressing the MLAs and civil society representatives, Lok Sabha MP from Guwahati Bijoya Chakraborty said, “Legislators must also make it a point to champion the rights of women in the unorganised sector and raise issues concerning the welfare of children, besides using their resources as public representatives in the fight against crimes like molestation, rape and dowry”. She said, on the whole legislators must be able to give a sense of security to women and children by fighting for their privileges both within and outside the House.

Columnist and television commentator Maini Mahanta said legislators, the police, doctors and lawyers have to be extra-sensitive on issues concerning women and child rights. “I know of a case where a woman was molested on a city road was asked by the police whether she had lost any of her belongings during the incident, thereby suggesting that it was not a major incident”, Mahanta said. She suggested that legislators have an important role to play in protecting the rights of women and children in the insurgency affected areas and called for induction of more women constables in the Assam Police. Mahanta reminded the legislators to press for a gender budget in the upcoming Budget Session of the Assam Assembly.

Jatin Hazarika, IAS (retd.), who has the distinction of working closely with six different Chief Ministers of Assam speaking on ‘Executive Legislature Relations’,  said as per laid down rules, a minister has the power to take the final decision in a matter concerning his or her department but a bureaucrat of that department is expected to provide the minister the right counsel. Hazarika said a bureaucrat is expected to be impartial but if he or she decides to be neutral, then work cannot progress as desired.

Former Assam Chief Secretary P K Datta, currently Chairman of the Fifth Assam State Finance Commission, said the fundamental principle of parliamentary democracy is the rule of law. Mr Datta said that if the legislators and bureaucrats decide to follow the rule of law, the chances of conflict between the two can be minimal.

Concluding the programme CDPS Executive Director Wasbir Hussain highlighted findings of a study conducted by the research centre on Tribal Women’s Access to Representation and Justice. The study conducted in Assam, Meghalaya and Nagaland found that the primary reason of women in these three states not being part of the decision-making process is the denial of party tickets to women by political parties. He, however, pointed out that the interest level of women in Assam in politics is quite high as revealed by the study.

22 Aug 2008 - 11:48pm | Nanda Kirati Dewan
Since 11th century in Assam silk weaving is one of the largest, oldest and finest industries as weaving always has been an integral part of lives of Assamese society. Its a taboo in those primary...