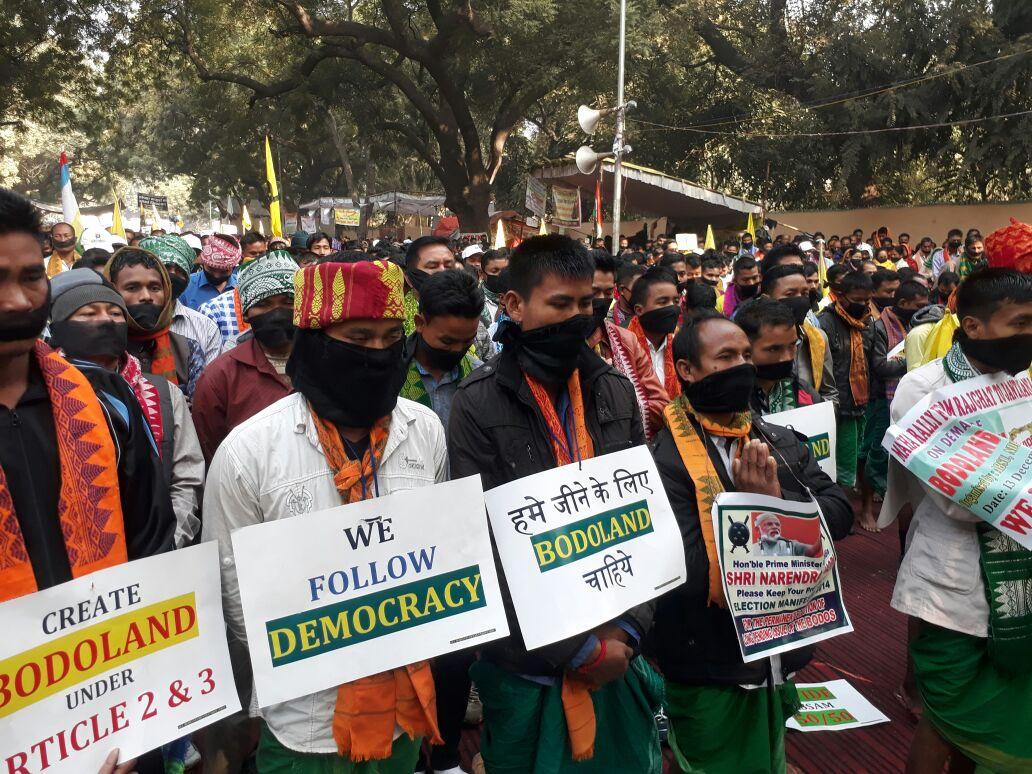 The ABSU and its allied movement groups carried out three-days continuous agitation programmes which concluded today beginning from December 12. The demands included resolving the Boro people’s demand for creating Bodoland state immediately under Article 2 & 3 constitution, ensuring political right to the Bodos living outside the proposed Bodoland Area, protect, preserve and safeguard the identity of the Boro and other tribal people with language, culture and tradition by creating Bodoland state and wanting justice to live with dignity and honour in our inherited land.

The Bodoland movement programmes in New Delhi,an information letter was submitted to the Prime Minister and Home Minister by the movement groups.

Promod Boro,president of ABSU said the Boro people, an indigenous people of India living in Assam for being victimized to socio-economic exploitation, suppression, oppression and political domination are at threat of total extinction. Even after 70 years of India’s independence the state has failed to protect, Preserve and safeguard the land, identity, language and culture of the Boro people. Boro people are very much part of the great Indian community and are loyal to the Constitution of India. The Boro people want to live with dignity and honour under the provision of the Constitution of India.

He has urged government of India to take bold step while solving long standing demand of bodoland issue.

‘We appeal the Government of India to come forward with a pragmatic policy decision on the Bodoland Issue as it has already elapsed almost half century through agitation of different nature, which has taken a toll of more than five thousand lives. The movement groups are determined to continue the Democratic Mass Movement until and unless the Government of India concedes the demand’,the movement group said.

2 May 2018 - 4:51pm | AT News
GUWAHATI: In a bizarre incident that triggers statewide protest, a senior police officer working in the outskirt of Guwahati city has been arrested on a rape charge. He is none other than VC Das,...

22 Sep 2015 - 8:15pm | AT News
Assam chief minister Tarun Gogoi on Tuesday dared state BJP MPs to face prime minister on the vital problems confronting the state for years. Talking to reporters in the sidelines of a function at...

25 Sep 2014 - 6:22am | AT News
Dhaka is waiting for early settlement of the land deal with New Delhi. This was what Bangladesh high commissioner in India Tariq A. Karim said in Guwahati. In his interaction at a FICCI function...