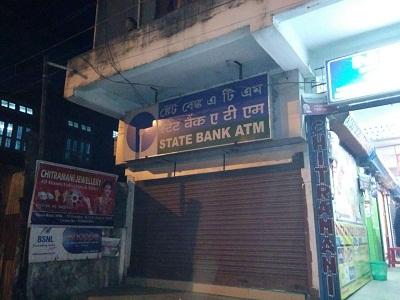 Bank customer,citizens as well students expresses resented over ATMs poor services in Kokrajhar, heart of BTAD administration since demonetization initiative was started across the country. Most of the ATMs seeing closed besides found not in service in the region.

Even though, demonetization initiative passed a month,yet no sufficient monetary availability was found in the bank,ATMs which has been waving a huge crisis of small notes as well harrasing common citizens among human life.

There are about 45 ATMs from different banks in Kokrajhar district,of which 12 are not functioning as well closed which has been creating major crisis among bank customers and citizens.

In Kokrajhar town itself over 30 ATMs are erected to give smooth services all over the town,but services are going very poor and weak. Citizens alleged that most of the ATMs are found not service and closed in the evening in Kokrajhar.Government of India and Reserve Bank of India proposes good availability of monetary after declaration of demonetization,but till today wave is reverse in the country.

Long queue along bank,ATMs have been seeing in the district as customer and citizens are getting to withdraw limited money at a time. In ATMs only 2000 notes is availability,not found 100,500 notes which is not suited to make marketting and feasibility to lead a healthy life.

Some sections of students who visited to the ATM centres said that we are facing hardship while leading a life in today’s expensive hour as there is no avail of small notes,except 2000 notes.

‘Government should make availability of small notes so that misery condition of common citizens be stopped’, students said.

Citizens urged the RBI and government to make avail of sufficient small notes in the bank,ATMs and markets to end crisis and hardships of citizens in the country.

Arup Kumar Brahma,Chief Manager of Kokrajhar SBI told that the bank authority is doing their activity and transactions as per guideline and directions reach from higher authorities. Supplying of huge small notes would be taken by near coming days just after reaching from concern authorities and presently we are distributing 2000 notes.

‘Supply of small notes like 100,500 would be giving in huge manner by near coming days’,he said.

31 Oct 2014 - 7:32am | AT News
Amid the statewide 12 hour Assam bandh the authorities have stepped up security measures to ensure peace and normalcy on Friday. Bajrang Dal called the bandh in protest against the AIUDF's alleged...